iTop VPN is developed by the home use software company iTop in 2016 and it’s a good option to improve your internet security and privacy or to simply bypass the geo block.

Additionally, it offers a free plan to provide 21GB of data a month and 100 free servers to compete with the majority of VPN providers.

How good is iTop VPN for streaming?

With the use of iTop VPN’s dedicated streaming servers, you cannot evade some of the most popular streaming services, such as Netflix, HBO Max, Hulu, and Disney+. I tested iTop VPN’s skills on a number of significant websites, and the outcome was as thrilling as you might want.

Overall, iTop VPN may be the best choice if you enjoy watching TV programs.

iTop VPN is a reliable and secure choice for torrenting. The P2P capabilities of iTop VPN are one of its biggest selling points. The company has specialist torrenting servers, therefore using iTop VPN for torrenting is trouble-free. 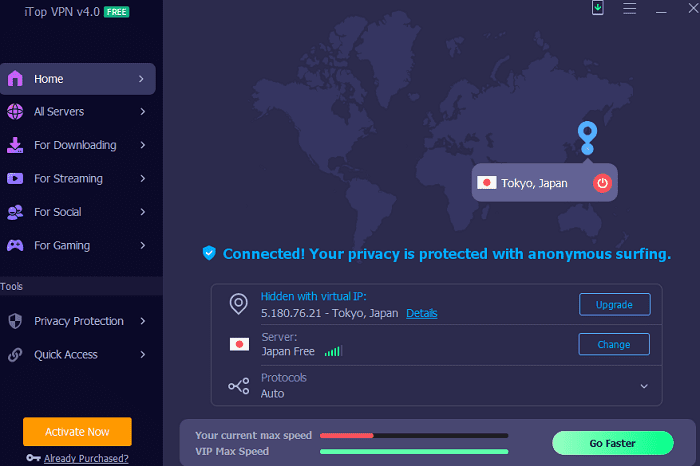 Is iTop VPN free to use?

iTop VPN is a free VPN that it offers 21GB of data per month and 100 free VPN servers available worldwide. You don’t need to create an account or view ads, instead, install the PC app and you can immediately get the free VPN servers to connect.  There are fewer servers and locations to choose from than on the paid plan, and there is no way to get around geo-restrictions, which are the drawbacks of the free plan.

All subscription options, including the 1-month, 6-month, and annual subscription plans, come with a 30-day full money-back guaranteed so that you can try iTop VPN paid plans for free, too. 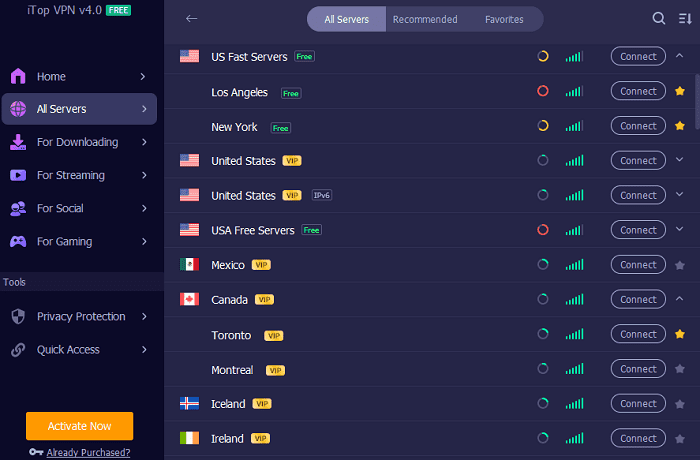 Although it’s not the most crucial feature of a VPN service, the number of servers has benefits. A large fleet enables them to avoid server traffic jams. It implies that if the user base is evenly distributed around the world, your speeds will suffer less. Remember that your location and distance from the VPN server will both impact your speed.

Regarding this, iTop VPN has over 1800 servers spread across 100 locations. The server count is therefore above average even though the location isn’t the largest.

Additionally, choosing a server and location on the iTop VPN app is quite simple and practical because it contains tabs for easily connecting the specialized VPN servers for streaming, torrenting, and gaming, as well as lists of Recommended servers and Favorite Servers.

The iTop VPN apps are well-designed and quite simple to use. Nevertheless, advanced users will find them more useful due to the variety of functions, complex settings, and comprehensive connection stats. Users of Windows, Mac, Android, and iOS will receive specific programs with friendly UI.

With iTop VPN, Windows users can choose from a number of tabs, including Quick Access, Server List, and Protocol Settings. You may rapidly change your settings or connect to a new server by switching the tabs.

Let’s say you already use cybersecurity products frequently. In such a case, you ought to have noticed that iOS apps typically outperform Android apps. The same applies to iTop VPN apps. The iOS version pales in comparison to the Android version.

iTop VPN makes sure you have the choice of connecting to the finest option while you are choosing a server and location that you want to connect to. In other words, it indicates which city and server are the greatest options.

As a feature-rich VPN, iTop VPN can meet the majority of your needs. Kill Switch, split tunneling, and even automatic browser history cleanup and ad blocking are all included.

When a connection to a VPN server is lost, iTop VPN has a typical kill switch that cuts off your internet access. This feature may help you avoid data leaks while downloading torrent files.

The kill switch will protect you if you’re working on anything important and the connection drops.

Split tunneling gives iTop VPN users a lot more control over their VPN configuration. You can select apps with this capability that can connect to the Internet without using a VPN connection. This indicates that they won’t use an intermediary and instead connect to your actual IP address directly.

The possibility that security alarms will be raised by your banking app can be reduced thanks to this functionality. These apps are especially alert to foreign IPs joining the website because that is frequently a clue that scammers have obtained someone’s data. All of these issues will be solved by split tunneling.

iTop VPN provides the majority of what you’d expect from a VPN, as a middle-of-the-road VPN provider. This service provider offers all the required features, including a working kill switch and a wide range of servers to connect to. Additionally, it includes P2P compatibility, unblocks Netflix, and provides a fantastic free plan. iTop VPN is a great VPN if you’re looking for a fast and inexpensive choice for Netflix and torrenting.

Different Ways to Meet Your Deadlines and Work Efficiently