Smooth Game Settings On PC: As you know, in a game, we will be given the option to adjust the graphics, to suit our needs.

It could be super cute, or it could be lowered so that the FPS obtained is more optimal.

Well, there are a lot of terms in these settings. Starting from antialiasing, antiapoptotic, filtering, and so on. 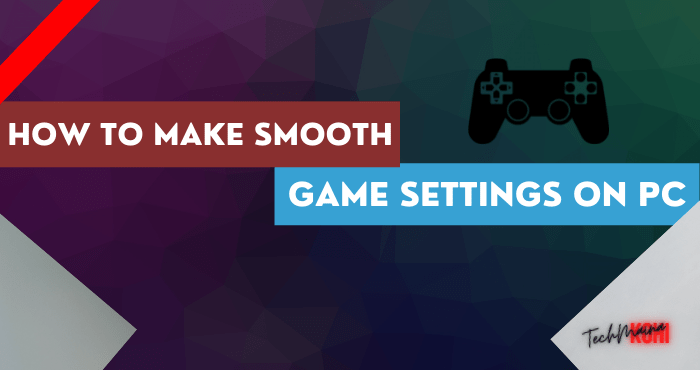 For those who have played the game often, it’s not a problem. It’s different if you don’t understand, maybe you will be confused.

When a new game is played, the graphics level settings in the game have actually adjusted to the specifications of the device used, and have also been optimized.

If your PC specifications are high, then the settings will be high. It’s the same with the other way around.

However, you also have to understand, that sometimes the settings of this game are not always 100% suitable for what we want. Sometimes the games we play still feel lag, slow, or often shuttering.

Therefore, we need to adjust it again, so that it is more in line with our wishes.

What Should Be Arranged?

Okay, as I said earlier, there are various graphic settings in the game. Usually, the higher the quality of the games we play, the more settings that can be set there.

Therefore, don’t be surprised if games with AAA quality, on average, have a lot of graphics settings.

Well, here I want to explain a tutorial, on how to adjust the game’s graphics settings, so it doesn’t lag when playing.

This article is a continuation of the discussion series “How to Overcome Game PC lag “, which I wrote earlier. But, here I only discuss the important things, yes.

That is the screen resolution.

It’s that easy, okay? Usually (usually you know, yes), the bigger the screen, the greater the resolution offered.

While on mainstream monitors in the range of 20 inches and below, on average they still use HD resolution (1366 × 768).

Well, if the laptop is a different story.

Again, the explanation above (both PC monitors and laptop screens), the resolution is not binding, yes. Because basically, they are different. Please check your own specs.

Then, what does resolution have to do with games?

The greater the resolution that is set, the harder the VGA works when used. It’s natural because the images we get will indeed become clearer, you know.

Do not believe? Try setting your game to the lowest resolution. If possible, 800×600.

Now see what happened? The game feels zoomed in and not clear, right?

Well, this Screen Resolution is certainly quite influential on game performance. If it is estimated, maybe this resolution can contribute to the performance of around 50%.

As far as I understand, the function of this setting in V-sync is to synchronize the game frame rate with the monitor’s refresh rate.

Both PC and laptop monitors have their own refresh rate specs. Usually 60Hz to 75Hz. Unless an expensive monitor or laptop, the refresh rate can penetrate 120Hz and above.

The V-sync function is closely related to the tearing problem, which is an event where there is texture damage when the game frame rate produced by the VGA is too much, but the monitor refresh rate is inadequate.

For example, your game FPS can reach hundreds of FPS, but the monitor refresh rate is only 60Hz.

When tearing occurs, the resulting texture in the game may tear or break. Usually in the form of a horizontal line.

Now, by activating V-sync, max FPS will automatically be locked according to your monitor’s refresh rate, so the tearing symptom will disappear.

Setup Tips: For this V-sync setting, if your PC/laptop specs are low, then turning it off doesn’t matter.

Those are the usual 3 settings. But for AAA games, the settings can even be up to 5 options.

Setup Tips: For this setting, I personally (in terms of convenience) prefer Full Screen.

From the name, you must understand, right? This setting is closely related to the quality of the texture produced by the game. The higher of course the better.

But, don’t forget that this texture is also closely related to the problem of used VGA memory capacity. The higher the setting, the greater the resource taken.

Setup Tips: Adjust the texture according to the VGA memory capacity. Don’t force it, if you don’t want to shutter to happen.

Antialiasing is closely related to the problem of lines ( edges ) in-game textures.

Take, for example, a chainsaw. Do you know what the teeth are like? Well, if in the game there is a jagged texture like that, then Antialiasing can smooth it out.

By blending the color of the pixels around the rough texture object, so that it looks smooth. The higher the Antialiasing setting, the smoother the resulting line.

Setup Tips: Antialiasing is quite influential on the number of framerates. So, it’s better to just turn it off if you want the game to run smoothly.

Confused about it, here. In essence, Motion Blur is more or less a ‘fuzzy’ effect or something like that.

Motion Blur usually gives a blur effect on the screen, except for the characters used.

As for the problems related to FPS itself, it varies, back to the game again.

Anisotropic Filtering. This setting is somewhat related to the game texture again.

An easy example, when you see a wall (in the game ), then move away from it, then the texture of the wall will become blurry.

Well, this Anisotropic Filtering serves to ‘clarify’ the texture.

Setup Tips: For me, Anisotropic Filtering is a ‘mandatory’ setting, although it has to be adjusted again according to specifications.

In essence, the higher the shadow setting used, the more detailed the shadow produced.

Setup Tips: If you want to increase FPS, please just turn off this setting. Quite significant, really.

For you, what is the best setting to improve game graphics quality? What is Texture? Antialiasing? or Shadows?

All are correct. But don’t forget the lightning effect, as known as the lighting effect in the game.

Well, Bloom itself is a setting to adjust the light intensity in the game, the result of which can make the game more realistic.

To make it easier, try comparing the sunlight in the game, in the Bloom setting off and on. The difference is quite far right?

Setup Tips: Turning off the Bloom effect, will definitely make the FPS go up.

Well, hopefully, it 9 explanations of game settings above can help you to launch games – games to play.

Maybe not all the games you want to play have the setting – setting above. Especially for a game – a game that is fairly old school.

However, most games should already be there.

So, now you just have to choose, do you want high graphics or high FPS? Just decide. Free, depending on individual tastes.

If there are settings that you don’t know about, please ask via the comment box below. Who knows I can help.