Do you know? How to Turn On Phone Without Power Button or It turns out that we can turn on the cellphone without using the power button.

The phone power button is broken, it often happens. Usually, the cause is: 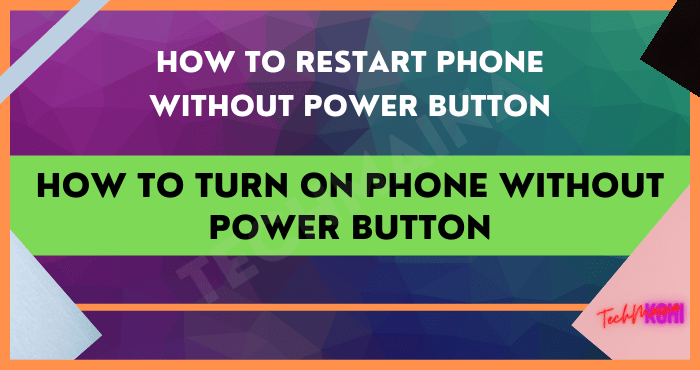 This broken button will automatically make trouble. Yes, of course, we will find it difficult when we want to turn on the cellphone.

Well, for those who want an alternative solution besides being repaired, here are a few things you can try.

How to turn on the cellphone without the power button easily

For the method that I want to discuss here, it can be used for all types of phones.

And others. Incidentally on some of the phones, I’ve ever encountered the problem. Either the button is hard (hard to press) or it doesn’t work at all

Let’s try one by one:

This method is arguably the easiest and coolest way to activate the cellphone when the power button is broken.

Use the volume down button, so later the volume button will function as the mobile phone power button.

Here’s how to turn on the cellphone without using the power button:

Now try to use the volume up or volume down button to turn on the cellphone.

To turn off the cellphone itself, we only need to open the notification menu at the top of the cellphone. Then just tap Turn off-screen.

I have used this method before on an Asus Zenfone cellphone. It’s normal without any problems.

2. Use a Charger or Power Bank to turn on the cellphone

Have you ever, when you’re using your cellphone, suddenly it won’t turn on when you press the power?

I’ve been several times. The reason is that the power button has started to have problems.

There is a special trick you know if we are experiencing something like this:

Very simple right? In addition to the charger, we can also use a Power Bank.

This method works if the phone is still active. It will automatically go to the lock screen.

Very few people know about this. I usually use this method when I want to turn on my Xiaomi cellphone without the power button.

If we remove the SIM tray, some types of phone systems will respond and make the cellphone active.

Very suitable as an alternative step:

In addition to using the Ejector, we can also use other objects. For example a needle or toothpick. Be free.

This Double Tap to Wake is a kind of feature to turn on the cellphone by simply tapping the screen twice.

This cool feature is generally already in phone output 2017 and above. If the release is below, it usually has to be rooted first.

Finished. Now press the screen 2 times. the phone will automatically turn on as usual

For this method, I have used it on Samsung cellphones, Xiaomi cellphones, and several other types of cellphones as well. Normal with no problems.

As we know, on Android phones there are various types of sensors that can be used to open the lock screen.

Using the sensor feature, it can automatically make the screen active.

Please just activate it. There are different ways (Depending on the type of phone used). The point is it’s in Android Settings.

6. Using Other Applications Instead of the Power Button

In the Android Playstore, there are several applications that you can try to activate your cellphone without using the Power button.

I myself quite recommend it. For example:

Please just search. There are so many things to try

That’s a little discussion about how to turn on the cellphone without the power button. Based on personal experience, hehe.

Actually, there are several other ways that can be tried. It’s just that, unfortunately, we have to root the cellphone first. So it will be tricky later.

As for the steps that I described earlier, everything can be done without the need for root mode. Guaranteed to work for all types of phones.