Causes of the Computer Keeps Shutting Down by Itself and Effective Ways to Fix Them  – Although it is considered one of the most advanced technologies that exist in this day and age, computers or commonly known as the PC acronym ( personal computer) have many weaknesses.

These weaknesses will appear if the user does not pay attention to the health condition of this device.

Without routine and optimal maintenance, and excessive use can be a driving factor for damage to several systems on the computer. 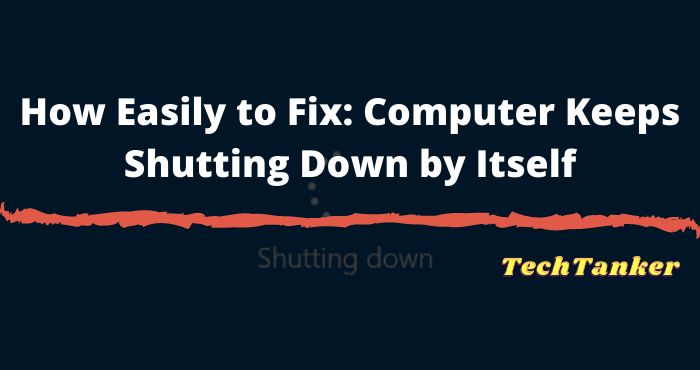 One of the problems that arise from these two factors is that the computer often shuts down suddenly during use.

For some people, this problem is very serious because it can interfere with ongoing activities while using the computer.

But for those of you who experience this, you don’t need to worry, because this time we will discuss the causes and ways to deal with computers that often suddenly die in great detail.

Then, what are the causes of the Computer Keeps Shutting Down by Itself and how to fix it? Let’s look at the following information.

If this happens, it must be resolved immediately so that the problem is not too serious and the device does not turn off completely.

The cause of the processor is that overheating itself occurs if the processor is installed and does not fit into place, cooler or cooler which is a lot of dust that inhibits air circulation in the computer, and can also be thermal paste processor that was never replaced.

These three things will cause the processor to overheat and the computer to turn itself off.

For more details on the discussion about the causes of the computer turning itself off and how to solve it due to overheating, can be seen here

Damage to this VGA card can be indicated by a hang or a computer that suddenly restarts by itself.

Similar to the cause of the computer’s first shutdown, this one cause should not be underestimated.

The sign that will appear if the VGA card is damaged is a blank screen even though the other device is on.

The VGA card itself has a very important function in a computer, therefore it needs special care and does not underestimate the slightest symptoms of damage.

If the RAM is in a damaged condition, the computer will shut down completely. Wow, isn’t it bad?

Thus, the condition of RAM must be kept clean so that it is not easily damaged and to avoid a totally dead computer. So, to find out the cause of damaged RAM is to use other RAM.

There are several causes that support RAM damage, namely dirty, overlocking, and also the continuously unstable voltage entering the motherboard.

But there’s no need to worry too much because we can also save RAM conditions in the following ways.

RAM itself is used as a place to store any memory that is used when the computer is on, so it is no longer strange if RAM is damaged it will hinder computer performance to cause total death.

This can happen if we install the wrong driver that doesn’t match the device. Because the key to computer survival is

matched or fitted hardware and software. If the driver does not match, the computer will shut down or restart by itself.

Therefore, the driver could be the cause of the computer shutting down itself.

This one cause is not very significant for the computer, but in some cases, it is also used as the cause of the computer turning itself off.

If this condition continues, it will spread to damage to the VGA, power supply, and hard disk.

The cause of the computer shutting down, which generally occurs is caused by a faulty power supply. This hardware failure is indicated by an unusual or strange-sounding fan.

In addition, the damage can also be indicated by the smell of Angus that is wafted around the computer.

To find out the damage from this power supply, you can do a trial using another power supply. If the above signs are gone, then they are obviously the power supply is broken.

The cause of the computer shutting down, which is the next is damage to the hard disk. This can be indicated by the computer that does not boot despite the display on the monitor screen.

Apart from knowing the sign above, it turns out that to find out the condition of the hard disk is to enter the BIOS and see whether the installed disk settings are the same as the physical specifications.

The power button is one of the most important components for turning the device on and off.

Therefore, if the power button is damaged, it will be fatal to the computer and this could be considered the cause of the computer turning off itself.

Then how to restore the power button function?

crash then the computer will not turn on. The cause of the Computer Keeps Shutting Down by Itself has very clear signs, therefore if the operating system has crashed, it would be better to fix it immediately.

10. The existence of a virus

There are several types of viruses that can cause a computer to shut down by itself. Signs that the computer has been attacked by a virus are computer performance that is getting slower, the operating system and software crashes, and a BSOD or Blue Screen of Death.

Therefore, if the motherboard condition is not good, the computer performance will be affected.

One result is a computer that suddenly shuts down, even the signs of a computer failure are difficult to know.

Replace the motherboard with a new one, and make sure to always keep the hardware clean

Well, that’s 11 causes of Computer Keeps Shutting Down by Itself and effective ways to deal with them.

If you think that the cause of your computer is not known where the damage is, then you can follow these general steps.

How to Fix Computer Suddenly Turning Off

Apart from some of the causes of the Computer Keeps Shutting Down by Itself repeatedly and how to fix it as listed above, there are also ways to overcome or prevent the computer from suddenly turning off.

Some of the methods above do not guarantee that they will solve the problems on your computer.

But that’s all we have done for the procedure that causes the computer to often turn off and on.