Question from a reader: Can someone tell me: What is GWXUX, and how to get rid of pop-ups about it?

Several times every day I get a pop-up telling me that GWXUX has stopped working.

I have checked other questions in the community, but they all refer to Windows 10. 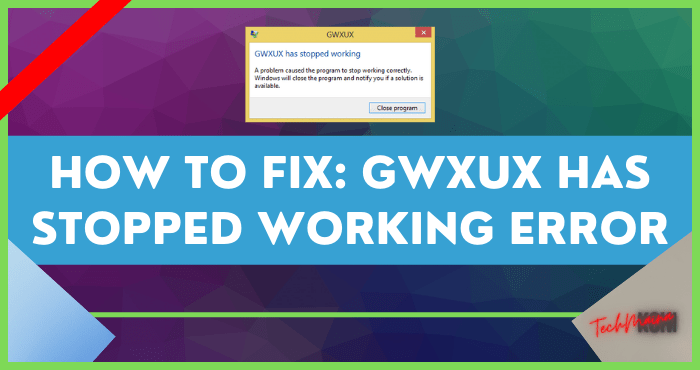 I don’t have Win 10, and I don’t even believe it’s released yet, so why am I getting this message?

When I click on the window icon in my taskbar, it opens to the Windows reservation offer. So far, everything seems to be going well.

I am using a laptop and I have Windows.

Before we move on to the fixes, let’s first find out what is?

Generally speaking, it is a Windows 10 executable file that is part of the automatic update.

It doesn’t really have much use except for showing popups.

The worst it can do is show you an error message when you try to open certain apps.

These messages may appear as follows:

Because of these annoying error messages, most of the users would simply disable GWXUX or remove it altogether. We have written a bunch of strategies to do this.

Before you apply these methods, be sure to create a system restore point in case something goes wrong.

As mentioned above, he was incredibly controversial. It was essentially an adware Microsoft installed on your computer without you knowing.

It would advertise Win 10, then download the operating system “just in case” you wanted to upgrade.

If it made sense to upgrade while it was free, it would have been decided when and how to do it instead.

Method 2: Repair “GWXUX.exe has Stopped Working” by Uninstalling It

I recommend setting the updates setting to manual to avoid receiving such updates.

Method 3: Edit the Registry to Repair the “GWXUX has Stopped Working” Error Message.

Editing the registry may seem difficult, but it is not. The registry is just a database of configuration settings that Windows uses to function properly.

If you wish, you can make a backup of the registry before making any changes by selecting File and Export.

You can then use the Import function if there is a problem.

If for some reason the error still occurs after changing this setting, you can either delete the registry key or set it to 0 to disable it.

Method 4: Use the Task Scheduler

Another easy way to solve the problem is to use the task scheduler.

If you don’t know how to open the taskbar then you can check out the previous article where we have shared in detail how to open task manager in windows.

Another solution that a lot of people in the Microsoft community use is to perform a System Restore.

This is one of the last remedies that you should do, as it can disrupt your files.

We strongly recommend that you perform a virus scan of your computer, in case the GWXUX issue is caused by a virus. Sometimes viruses hide in the form of .exe files.

We’ve looked through Microsoft Answers and Reddit for some forum feedback – here’s what we found:

A forum user mentions that GWXUX.exe is an executable file, owned by Microsoft. It adds that it is usually located in the Windows/System 32 folder and is no larger than 360KB.

The person also mentions that it is not a Windows system file and does not cause problems in most cases. cases.

Another individual said that he was starting to get an error message that GWXUX had stopped working several times a day.

A forum member mentioned that you can remove GWXUX if you’re not interested in upgrading to Windows 10 by going to Installed Updates and uninstalling KB3035583.

A computer user said that he wanted to reserve Windows 10, but every time he clicked on the taskbar, he got the error message that GWXUX has stopped working.

He discovered that the problem was that the KB3035583 update didn’t install properly or got corrupted for some reason.

Another person said they didn’t want the free Windows 10 upgrade and were annoyed by the constant pop-up.

She said it was a hassle to force people to choose Windows 10 and she didn’t like the direction Microsoft was taking.

She mentioned that she preferred to choose her own drivers since she often had problems with Microsoft.

One poster commented that he tried to click “Get Windows 10” and got an application error.

The same thing happened when he clicked “Check your update status.” He said that he had to reinstall the app because he wanted to get his copy of Windows 10.

Another individual complained that “GWXUX has stopped working” started appearing on his screen constantly.

He restarted his computer several times, and the message kept appearing even though he had changed his settings to hide icons and notifications.

A computer user said that he tried Windows 10 for a few days, but he didn’t like it. Therefore, he went back to Windows 8.1. However, he has since started getting an error saying that GWXUX has stopped working and he couldn’t find a way to remove the update from the Windows update list.

A poster on the forum said that GWXUX was causing problems when working online and that you had to uninstall 3035583 and KB 2952664 as well as the GWXUX folder to completely remove it from your computer.

Another reader shared that he was having similar issues with the GWXUX process and the “Get Windows 10” button was not responding. Finally, he reset Internet Explorer settings and was able to install Windows 10.

A technical forum commenter said that GWXUX was installed by Windows update KB3035583 without any prior explanation from Microsoft as to its purpose.

A computer user observed that his laptop (Windows 7) was working fine until the new security patch from Microsoft was implemented. After that, his computer started crashing several times a week. Ultimately, he traced the crash to GWXUX.exe.

One person claimed that if you remove the GWXUX update from your machine, it will disable Windows 10 fallback and you will have to install a new one if you want a copy of Windows.

When we went through various technical forums and the Microsoft support site, we discovered that people were looking for GWXUX.exe application error, and GWXUX crash. GWXUX and GWXUX virus stopped working on Windows 7. People were also looking for answers on how to uninstall GWXUX.

These are the possible solutions to correct the Gwxux problem. Do you know of any other solutions to fix GWXUX has stopped working errors in Windows?

If so, mention them below in the comments section!