If you have the same problem in the League of Legends game, let’s discuss it together. In this article, we are going to share some solutions that will help fix this problem so that the game can be reopened when you want to play it. 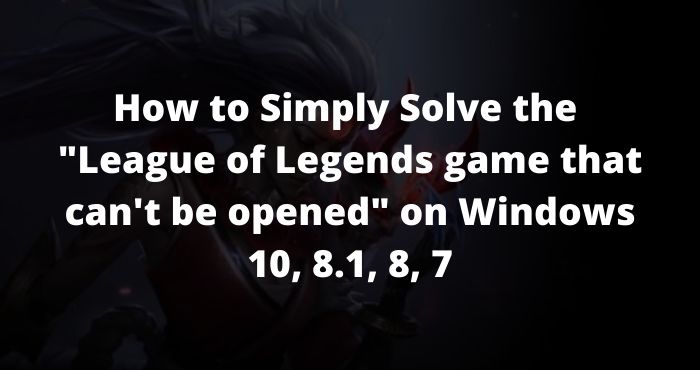 League of Legends won’t launch after being clicked – This is a relatively common problem with League of Legends. This problem is usually caused by apps like Steam or Razer Synapse, so make sure to close those apps before starting the game.

League of Legends can’t be opened on Windows 10, 8, 7 – According to users, this problem occurs on all versions of Windows. However, almost all the solutions I’m going to share are compatible with older versions of Windows, so you can use them even if you’re not a Windows 10 user.

League of Legends does not start due to an error rads (black screen appears only) due to the firewall – There are various problems that can occur and prevent League of Legends from running.

If you are facing Roblox Error Code 267, then you can read the article to solve the problem easily.

How to Fix: League of Legends Game Not Being Opened in Windows 10, 8, 7

Solution 1: Start the Game Directly from the Installation Directory

If League of Legends is not opening on your PC, the problem is probably your shortcut keys.

According to users, sometimes your shortcut keys might not work properly, and to fix that problem, it is recommended to start the game directly from the installation directory.

If this solves the problem, you should always use this method to start the game.

However, you can fix this problem by following these steps:

If League of Legends Not Opening on your PC, the problem is probably a background process.

According to users, sometimes certain League of Legends processes might be running in the background, and that can cause this problem to appear.

However, you can fix the problem by simply disabling all League-related processes from the Task Manager.

If the game doesn’t start, the problem might be a corrupted installation. To fix this, it is recommended to delete certain files from the game installation directory.

It’s relatively simple, and you can do it by following these steps:

To fix the problem, it is recommended to repair your installation by following these steps:

If none of these solutions fix the problem, you may have to uninstall the game and install it again.

There are several ways to do this, but it is best to use uninstall software. After you delete the game and reinstall it again, it’s guaranteed to run smoothly.

According to users, sometimes League of Legends doesn’t work due to a problem with your graphics card.

Your graphics card is essential for gaming sessions, and if there is a problem with the graphics card driver, you may not be able to play League of Legends at all.

To fix this problem, it is recommended to remove your graphic card driver and use the default driver instead.

There are several ways to do it, but if you want to completely uninstall the driver, I suggest you use Display Driver Uninstaller to remove it.

According to users, sometimes other applications can interfere with League of Legends and cause problems like this to occur.

One app that can interfere with gaming is Steam, so if you’re using Steam, make sure to close it before starting League.

Solution 9: Run the Game as an Administrator

Those are some solutions for overcoming the League of Legends game that can’t be opened on Windows 10, 8.1, 8, 7.