In this article, we are going to share with you the main differences between Microsoft Edge vs Google Chrome.

Google Chrome is the reigning king of browsers, with the highest usage on computers and mobile devices.

Microsoft Edge is available on most machines as it is installed by default on Windows-based devices. 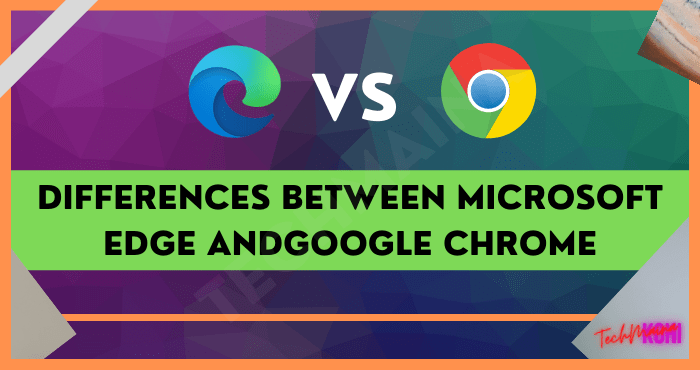 We examined the main differences between these browsers to help you decide which one you should use.

In this article, we focus on the differences, but Microsoft Edge and Chrome are similar web browsers with a little difference.

In most cases, the choice to use one of these is personal taste.

For example, you can expect Chrome and Microsoft Edge to:

The difference between the two browsers lies in how each person activates the functionality.

Here’s how each browser implements key aspects of the browsing experience, including the rendering engine, availability of extensions, defaults for other features and services, and compatibility with the desktop and mobile platforms.

WebKit is part of an open-source engine called KHTML, which the Linux K Desktop Environment uses as its default browser.

The open-source software license from this iteration allowed Google to put the browser together quickly, which is partly the reason why Chrome has an open-source variant called Chromium.

Other organizations can use this framework to build their own browsers.

Internet Explorer, especially versions 6 through 8, is very finicky when it comes to displaying websites.

Pages that display correctly (though slightly different) in Mozilla Firefox or Chrome may appear cluttered in Internet Explorer 6 and require a special workaround code.

A similar problem occurs in EdgeHTML, although the engine is faster and has gotten rid of many old problems.

You can easily browse and install this add-on from the Chrome Webstore.

Chrome isn’t the first browser to come up with the concept of extensions.

However, this browser has one of the most extensive libraries.

Google makes it easy for developers to code and submit new extensions to its store.

Microsoft Edge also supports extensions and has a section in the Microsoft Store where you can search for extensions.

Many of the larger apps, like Evernote Clipper, come as Microsoft Edge extensions.

Since Microsoft Edge is now built on top of Chromium, it supports extensions from the Chrome Webstore (though you’ll see a pop-up prompting you to switch to Chrome).

Depends on the Environment You Choose

The default settings of the two browsers are different, but you can change this setting.

As for Microsoft, they implemented the following default settings for the Microsoft Edge browser:

“Available for Most Operating Systems”

Chrome is one of the most widely used cross-platform browsers out there.

Chrome is available for Windows, macOS, and as a mobile browser on Android, iOS, and iPadOS devices. Chrome is also available on Linux.

Microsoft Edge is installed on all standard versions of Windows. This browser is also available for macOS, iOS, iPad, and Android.

Note: Microsoft announced during the Ignite 2019 conference that a version of Microsoft Edge for Linux will be available in 2020.

Here’s a summary of the differences and similarities between Microsoft Edge and Google Chrome:

Microsoft Edge and Chrome are becoming more and more alike every day, and it is likely that the differences between the two will continue to diminish.

Many of the differences discussed here are evident in current versions of Chrome and Microsoft Edge. However, some will disappear in the near future.

Despite the similarities between these browsers, what may remain different is the connected services.

For example, you can sync bookmarks with your Microsoft account in Microsoft Edge, and Bing will remain the default search engine.

However, a common platform makes it easy for developers to create consistent content and apps across major browsers.

You don’t have to choose.

You can use both browsers and use whichever works better for a particular website.

However, if you want to choose one, use Chrome if you use multiple web apps or if you invest heavily in the Google ecosystem.

If you’re using a Windows PC, Microsoft Edge might be a good alternative.

This is a capable browser if you have concerns about Google advertising activity.