Causes of Laptop Overheating: You may be wondering, why does a laptop that is used so hot so fast.

It has only been used for a while, the heat feels very high, especially in the lower case and in the keyboard area.

Usually, when the laptop is hot like this, the next symptom sequence is slow laptop performance, very noisy fan noise, the mouse cannot be moved (freezing), and the worst is the blue screen. 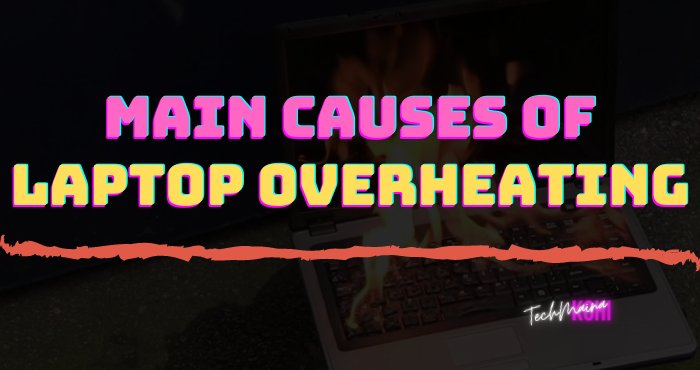 Even excess heat can cause the CPU to Stop Working and crash the system. In the computer world, the heat that has passed this limit is also known as overheating.

Below we summarize some of the most common causes of overheating. Try to look, at what numbers happen to your laptop.

1. The Laptop Vents are Clogged

Laptops also have vents in the form of holes where air can come and go.

This vent serves as a way out of the hot air exhaled by the fan inside the laptop.

Over time, dust and dirt will build up and close the vents, preventing heat circulation from inside the laptop.

This of course will cause the temperature of the laptop to rise quickly because the heat is trapped and cannot be removed.

What you can do to fix this is clean the laptop vents so that dust and dirt don’t accumulate and block the escape of hot air.

2. The laptop Fan Is Off

The main cause of laptops overheating is due to a cooling system that is not running well.

This problem is often caused by the laptop’s internal fan on the CPU and GPU not functioning normally or even not starting at all.

Just like electronic devices in general, laptop fans also have a limited life.

An old laptop fan can damage the capacitor and cause it to malfunction.

If this is the case, the solution you can do is immediately install a new fan.

How do I know if a laptop fan is dead?

It’s easy, you can feel the air blowing out of the vent. If there is absolutely no feeling of hot air being blown out, then you can be sure that the fan inside the laptop is dead.

Another way is to monitor fan rotation through temperature monitoring applications such as HWMonitor. You will know if the fan is dead because there is no spin at all.

3. Fan Slows Down Due To Dust

Talking about the causes of overheating on a laptop, usually, it will not be far from the dust problem.

Because indeed dust is the dirt particle that most easily enter the inside of the laptop and get trapped there.

Apart from the completely dead laptop fan, the amount of dust that has accumulated on the fan can also cause the laptop to heat up quickly.

This is because the fan rotation slows down so that the cooling process of the components inside the laptop is not optimal.

The solution to this is to open the laptop case then clean the dust that sticks to the fan and other components.

You can use a small brush and a blower to clean areas that are narrow and hard to reach.

Many of us don’t pay attention to where to put our laptops when in use.

Often we put it in places that actually trigger overheating. Like putting it on mattresses, pillows, and other uneven surfaces that block the way out of heat from inside the laptop.

The air vents on a laptop that are blocked by objects such as cloth and piles of books will cause the laptop to heat up quickly because the air circulation inside the laptop is not smooth.

Placing the laptop on top of these places also makes the ventilation of the laptop vulnerable to dust and dirt.

The solution is to place the laptop on a flat, rigid surface. If you want to use it on a mattress, provide a base underneath such as a cooling pad, board, cardboard, and other objects that don’t have the potential to hinder the circulation of air on the laptop.

Thermal paste is an introductory medium that functions to transmit heat from the processor to the heatsink, which is then released by the fan through the laptop vent.

This cooling mechanism will only work optimally in the presence of thermal paste. If you haven’t replaced it for too long, the thermal paste can dry out and the CPU cooling system will suffer.

If this happens, then the heat will be trapped and accumulate on the processor part and cause overheating.

To prevent this from happening, you need to check the thermal paste regularly at least once every 1-2 years.

You can use the aggressive temperature increase on the laptop as a benchmark to check whether the thermal paste is dry or not.

6. Laptops Are Used To Play Heavy Games For A Long Time

Laptops that are used to work for too long without a break can cause an extreme increase in the temperature of the components in them.

Especially if the program that is running is quite heavy, such as playing games with high graphics, editing and rendering video, or opening dozens of browser tabs.

The point is that the longer and heavier the work is done, the heat on the laptop will also increase.

If this is not balanced with a good cooling mechanism, the laptop may overheat.

To fix this you can use a cooling pad (cooling fan) and provide a break if the heat on the laptop is too high.

Do not be easily tempted by “incitement” to upgrade because actually increasing the component specifications will also increase the power consumption of the laptop.

Many of us are often dissatisfied with the default specifications of our laptops, so we can’t help adding RAM, replacing VGA, and other upgradeable components.

Even though upgrading components will bring greater power consumption consequences.

This can cause the battery to run out quickly and the laptop to heat up faster than usual.

Similarly, overclocking the CPU and GPU will force these components to work the extra mile.

The laptop may feel faster, but as a consequence, it will get very hot. If the cooling system is inadequate then overheating may occur.

We’re not saying upgrades and overclocking is bad, but do it wisely and carefully.

Using a laptop in a closed room with warm temperatures can also be one of the causes of overheating.

This is a factor that is rarely considered, even though the effect of room temperature on the increase in laptop heat is quite large.

For example, suppose you work during the day in the room, the weather is hot, the roof of your house is made of zinc, the windows are closed, and you turn on the fan.

With conditions like this, you can be sure the room temperature will feel hot.

You may still be able to cool off by sitting in front of a fan, but that won’t help to bring down the high room temperature. The impact of the laptop will be very hot.

The solution is to always use a laptop in a room with good air circulation. Avoid using a laptop in a closed room during hot weather, unless the room has air conditioning.

Apart from the hardware overheating factor on the laptop, it can also be caused by malicious software that spurs the CPU to work very hard and continuously.

You may not be able to see the process, but you can usually feel the signs of the virus in action.

A laptop infected with a virus will appear to use unnatural resources, even though there are no programs running, but the CPU, RAM, and DISK usage can reach 100%.

One example of a virus that often causes problems like this is a shortcut virus with its ability to replicate itself continuously.

As an impact, you will feel the performance of the laptop which is slow, the fan is very noisy, and the temperature is hot.

To overcome and prevent this from happening, you can do a full scan using one of the best antiviruses.

Don’t forget to always keep your antivirus updated in order to detect new types of viruses.

10. The Operating System Is Too Heavy

The last cause of laptop overheating is the use of an Operating System that does not match the specifications of the laptop.

If you are using an old laptop with a single-core processor and 2GB RAM for example, then don’t force it to install Windows 10. Use a lighter OS like Windows 7 or one of the Linux distributions.

An Operating System that is too heavy will make your laptop go the extra mile from the start. As a result, the temperature on the laptop will also heat up easier.

When The Laptop Overheats, What Should I Do?

If your laptop is already overheating, the first thing you can do is try to cool the laptop using a cooling pad or ventilator, if the heat is too excessive then turn off the laptop first.

Next, do the steps in this tutorial:

You can start checking whether the ventilation of the laptop is covered with dust, if necessary, open the laptop case and clean the inside.

Also, check if the CPU and GPU fans are still working and replace the thermal paste with new ones.

Turn on the laptop again and check if there are heavy programs running, it could be that your laptop is infected with a virus so that it forces it to work extra.

After reading the explanation above, which factors have the most influence on the overheating of your laptop? We are waiting for his opinion in the comments column.

How To Disable Touchpad On Windows 10 [Any Laptop]

How to Cool Down a Hot Laptop: A Step-by-Step Method

Best 15 Ways To Fix: Zoom Video Not Working On PC

Best 15 Ways To Fix: Zoom Video Not Working On PC