Voice Changer App for Free Fire – Is there an application that changes the voice when playing free fire into the voice of the opposite or special sounds such as the voice of a fun, robot, monster, chipmunk, echo, and ghost voice?

The answer is, there is. Read on for the article.

Besides aiming to disguise the character, changing the voice in the game is also useful for fun to playmates. 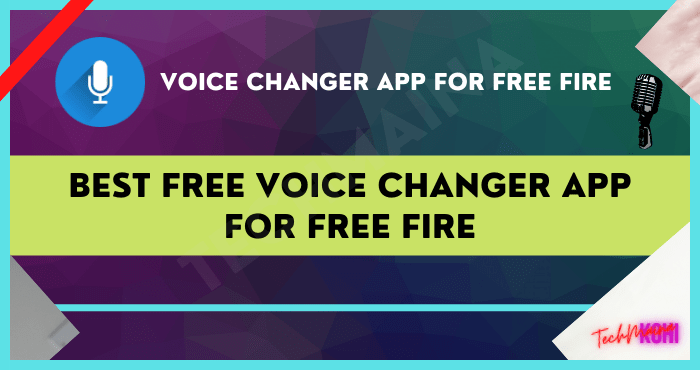 Being able to prank friends with other people’s voices is certainly a pleasure for us.

The way the voice changer application works when playing free fire game is to process voice input with voice changer technology and then issue it in the form of modified voice output.

So when this application is activated, all applications (calls, chat messengers, etc.) and games (free fire, PUBG, Hago, etc.).

That have voice call-based features will all change according to the settings.

There are quite a number of voice-changing applications when playing free fire on Android that can be used.

Oh yes, for those of you who use a PC/laptop, you can also use the PC/laptop voice changer trick, right?

Without further ado, here are some selected applications that we provide special information for you:

VoiceFX is the first voice changer application when playing online games on Android that we recommend for you.

There are many reliable features, including live voice player and converter, microphone streaming to games and media players, record and playback, save and share, and voice converter from existing audio files, such as music or other audio.

The resulting audio effects are not half-hearted even if we use the free version though. Among them are robots, girls, boys, aliens, children, autotune (so you can sing even if you can’t sing), squirrels, sheep, caves, drunk people, space, slow & fast, and monsters.

Indeed, the application called Voice Changer Mic for Gaming is intended for gaming devices such as PS4, PC, and Xbox. But with additional devices, this application can be used for Android smartphones.

This is because Android does not allow 2 applications to use one mic together. So it takes another android device and Y-Splitter to run it.

There are 14 high-quality sound effects produced from the voice changer application when playing this free online game because it has a noise gate filter. All these sounds will still run in the background properly even if the screen is off.

The sound processing technology produced by the “voice changer with effect” application is very good, the response time is high, and the sound produced is also very clear.

It has been downloaded by more than 100 million android users with a pretty good rating of 4.4, proving that many people are satisfied with this application.

Despite having a very light size of only 6.4 MB the effects produced by this voice changer application when playing this online game are numerous, more than 40.

Among them are zombies, giants, helium, aliens, squirrels, space, and the sounds of other animals. special.

This app even has another cool feature, which is to create various sound effects just from text.

This “Voice Changer” by AndroidRock is the most popular voice changer application on Android that has been downloaded by tens of millions of people with a high rating of 4.4.

Thus there is no harm in us making this one application one of the best voice-changing applications when playing online games on Android.

The sound effects produced are quite varied, including the sound of squirrels, hoarse people, robots, women, men, and several other funny effects.

Having a fairly simple interface, this application also has simple features such as recording sound, giving effects to audio files, saving and editing sounds, and sharing to social media.

This voice changer application when playing online games has a very good appearance, simple, and has quite a lot of features, but unfortunately, we have to buy this application in order to enjoy the features in it.

Because this is a paid application, of course, features and service updates will continue to be updated by the developer.

There are 3 different modes that we can use, namely real-time (must be with headphones), recording, and parrot.

So, besides being able to be used for games, you can also share your voice recordings in the form of a wav file or it can also be used as a ringtone.

Those are some kinds of voice changer applications when playing online games on Android with their own unique features.

If you are confused about which application to choose, you better try it one by one and then compare the results.

After that, just use the selected application when you are playing games with friends.